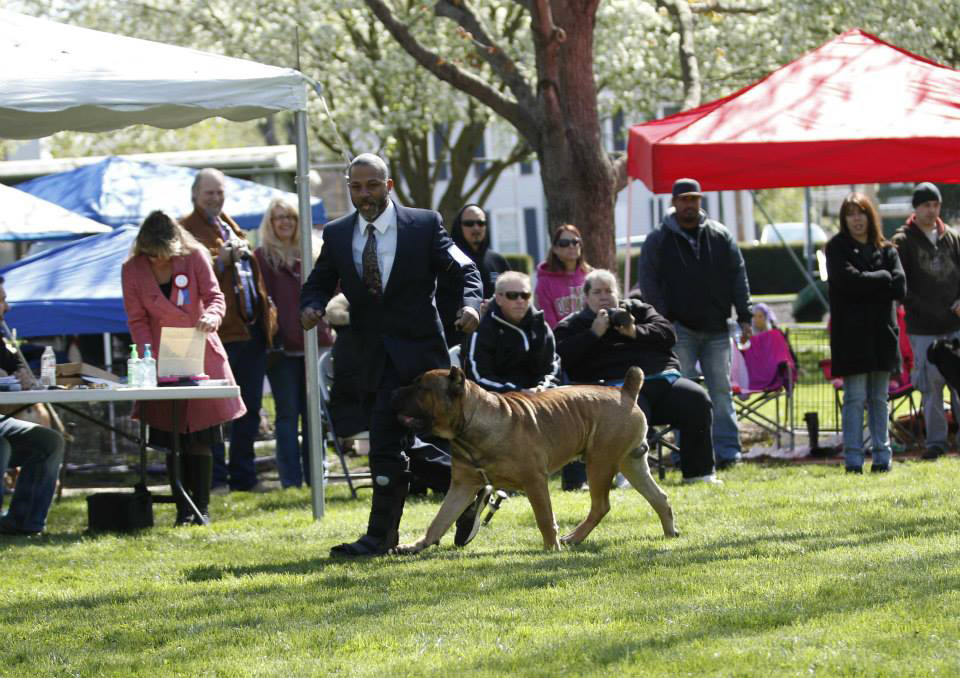 If there was ever a checkered past, my life was it and yet it has come full circle. If not for the unconditional love that dogs give, only God knows where my life may have ended up. It is their love and my passion that drive me to be the best for my dogs and breed.

My dogs always have been, will be, raised with our children. Many, if not most, Cane Corso owners that I have ever known are families with children. However, it should be made clear that they are naturally possessive, territorial, dominant, and distrustful of strangers. This is why socialization and consistent training are vital.

I would described the Cane Corso as gentle and protective with children and members of their immediate human family as well as being compliant, responsible, malleable, utterly devoted, affectionate, great loyal companions and super watchdogs.

As a breeder, I make myself available for advice and guidance throughout the life of our puppies, and I desire to be involved in their lives. I am more than happy to help in any way, as this ensures the best possible environment for both the puppies and their families.

The first thing that comes to my mind when I hear “Cane Corso” is “protection” or “guardian.”

The breed name is said to have been derived from the Latin word "cohors," which can be translated as "guardian," "protector," or "guardian of the courtyard."

About the Cane Corso

At nearly 28 inches at the shoulder and often weighing more than 100 pounds, with a large head, alert expression, and muscles rippling beneath their short, stiff coat, Corsi are at a glance intimidating creatures. Their imposing appearance is their first line of defense against intruders. As one writer put it, “An understated air of cool competence, the kind of demeanor you’d expect from a professional bodyguard, is the breed’s trademark.”

Corsi are intelligent, loyal, eager to please, versatile, and intensely loyal to their humans, but are also assertive and willful, and can end up owning an unwitting owner. As with any other big guardian dog, responsible breeding and early socialization with people and other dogs is vital.

The Cane Corso (KAH-neh-KOR-soh; plural: Cani Corsi) belongs to a subcategory of working breeds called mollosus dogs, or mollosers, named for the Molossi, an ancient Greek tribe thought to have bred giant, big-boned guardian dogs of Mastiff type. At the height of the Roman Empire’s power, the legions that subdued and occupied the Greek islands brought mollosers back to Italy and bred them to native Italian breeds.

The offspring produced by these crosses were ancestors of the modern Corso and it’s larger relative, the Neapolitan Mastiff. The original Corsi were used as dogs of conquest who earned their stripes as “pireferi,” fearless dogs who charged enemy lines with buckets of flaming oil strapped to their backs. It is supposed that these early Corsi were bigger, more lumbering dogs than today’s sleeker version, which moves with a catlike grace.

With the dissolution of the Western Empire in the fifth century, Italy’s legions and their dogs were out of work. Corsi adapted to such civilian jobs as wild boar hunting, farming, livestock droving, and most famously, guarding farmsteads and henhouses. The Corso was for centuries a familiar sight on the farms and pastures dotting the Italian countryside. But the effects of constant invasions of the Italian peninsula and Sicily, economic and political upheavals, and mechanized farming conspired to reduce the Corso population to precariously low numbers. By the mid-20th century, the breed was all but extinct.

Specimens did survive, however, in Italy’s back country. In the 1970s, a group of Italian fanciers banded together to revive the breed of their rustic ancestors. The Society Amorati Cane Corso (Society of Cane Corso Lovers) was formed in 1983, and by the following decade Corsi were being exhibited in European dog shows. The first Corso import arrived in America in 1988, and in 2010 the breed was recognized by the AKC.

This is should be a prospective customer's number one call to action, e.g., requesting a quote or perusing your product catalog.